She stayed up all night thinking of how life would be with him. They would get up early, walk the little mutt, follow it up with some yoga and enjoy a glass of OJ together. They would do road trips on the bike, soaking in the sights of the little villages they’d ride by. He would hold her close and comfort her with his confident grip, when she felt unprepared for life’s turmoil. He would join in and they would goof around the house, doing things inappropriate for their age. They would stare into maps together and get lost in the new city, walking in different directions before following each other. They would get drunk like goats at New Year’s Eve and nurse each other’s hangover the next morning. They would enjoy being lost in their individual conversations at the party, while continuing to keep an eye out for the other. They would sit quietly, elbows touching, watching the sun set at the horizon, the waves washing their lives away.

But, did she even know if he liked biking? What if he hated the sea and he psycho-planned his trips to the point of being boring? What if he did not think that women should have a voice of their own and he liked people to simply follow him while he led the way? She knew so little about him and yet here she was losing critical shut-eye concocting the impossibles in her head. Did he not mention his wife and two grown boys? Where did they fit into this impossible dream of hers?

Nowhere! Logic and reason had no room in a house commanded by lust. They had met after a long time and she knew there was something about him that clicked immediately. She felt at ease in his company, the conversations felt unforced and the whole atmosphere felt like home. The trivialities that people often delved too deeply into, the mundanes about the outwards, seemed to be quickly brushed off. It wasn’t the sapiosexual her getting turned on by the depth of the conversations. And yet!

Whoever coined the phrase “Love at first sight!” was so mistaken. Love takes its time, progresses gradually, considers the positives and the negatives and weighs its losses before surfacing. What happens when you meet someone for the first time, the instant need to connect, the warmth in the hug, the affirmation that you belong, the validation of a chemistry match – none of that is Love.

It is but “Lust at first sight!”

SilverGhoster and his classmates are weird. Period. For students getting an. MBA degree, especially in Educational Leadership, they seem to be a little immature in certain aspects. I remember having a similar conversation with GardenMan and his Senior, but these were u degrade kids in their second year. Not experienced professionals pursuing a professional degree, and heading off to lead institutions.

The bone of contention? Class notes, should one share them or not. I have always related to the concept of Open Source over proprietary software even when working. I believe that knowledge should be out in the open, available for those capable to make the most of it. And by reading the notes that you took in a class, if another is able to score more marks than you, what does it truly say about your preparation?

I take my notes online, on a OneNote, and the notebooks are shared with my classmates; well, both of them. At the end of the first semester, they themselves realized that using another’s to study us only so effective, and it’s more beneficial to take your own notes. Even now A uses my notes online but as a guide for last minute preparation.

It reinforces my thought, that when you put all your cards out there, people realize that their own limitations would stop them from making the most out of what you shared. And you eventually come out being the smarter one. Because we all know that when you argue with a fool, that automatically makes it two.

“It is also well known that the one that doesn’t share his bread with the doggo is the fool. So, can you? Now please?” Scotch

The area that I live in is a nightmare for doggie walks. There is an eatery every 3 feet and no human that eats there knows how to keep his food in his plate. So I’m left with a dog that is constantly sniffing and gobbling up food dropped on the ground. No amount of training can teach a Labrador not to eat food, I hear.

Scotch knows how much this irks me and has found her smart ways of getting around. The minute she smells something wonderful, she’ll squat as if to take a leak, only to munch on all the yummiest, while I let go of my guard thinking she’s just doing her business. Today, scotch gobbled up a mouthful of some spilt food while I was looking around for cars. This pissed me enough to make me smack her on her mouth with the leash.

I repented it almost immediately. And as I walked back to the apartment, asking her a sorry every step of the way, I thought of all the parents that beat their children to correct truancy. Scotch is not even my blood and my blood boils when I beat her (those rare occasions when I do). I cannot fathom the logic parents hold to beat their children to behave. Wouldn’t they feel more guilty than accomplished? Wouldn’t the purpose of the rebuke seem too trivial compared to the pain they just inflicted on their own? How would one justify causing pain to another that they love, in the name of love?

“Us dogs are very forgiving, S. Worry not. But that spicy chowmein I gobbled does seem to have given me an upset stomach. Can we go for a walk again?” Scotch 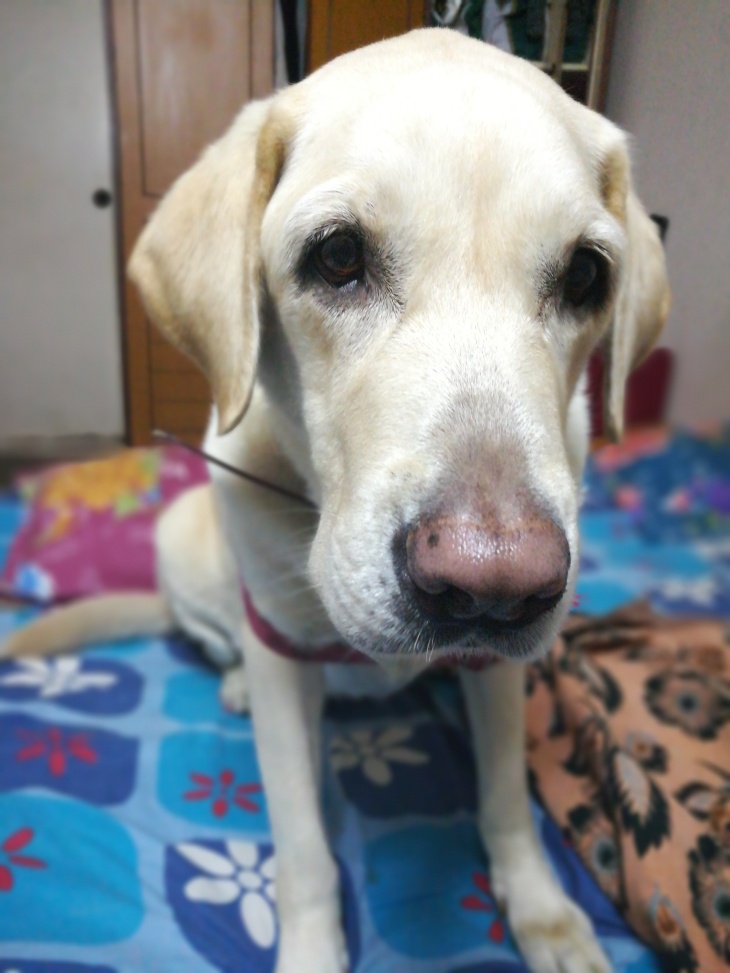 I know it’s midnight. But can we go for a walk, pretty please?

PS: Lasted a whole month of journaling. And this had been fun. Let’s keep em coming!